Richard Rycroft's presence on the internet

Another suitcase in another sprawl

It’s the 31st July. An occasionally sunny Sunday in Gravesend. Johnny Walker’s Sounds of The 70’s is on Radio Two.  Life would be insuperably wonderful but for one thing. I can’t get my suitcase to shut.

It’s the day before I travel to Edinburgh for a month at the festival, and suddenly everything is urgent. And my suitcase won’t close.

In mitigation, most of it is props and performance clothes; I’ll be performing my own solo show and acting in a play in which I seem to have more costume changes than a Cher  concert. 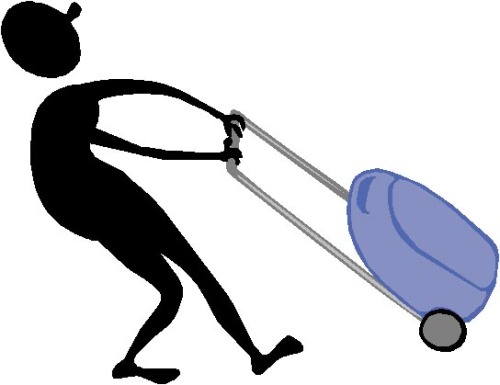 But I’m pathologically rubbish at travelling light anyway. Tomorrow is going to be a travel nightmare!

The first few days are going to be stressful. Did my posters arrive at the venue? Have we sorted out all the props for the play? Can we get a line-run organised before the technical rehearsal? I thought this road would lead to the road I want to be on, but I’ve been walking uphill on cobbles for an hour and I’m lost… And on and on. Yet, I am SO looking forward to the festival this year. It’ll be the first time I’ve performed there since 2008, when I shared two stand-up shows a day with another act. This will be my first time with a solo show. And my first stage play for rather longer than I’m proud of.

I’m looking forward to seeing comedy pals from around the country, who I don’t get to hang out with on a regular basis. I’m looking forward to performing, both the shows and various spots around town at all times of the day and night. I’m looking forward to being tired and irritable and homesick… and then suddenly not being any more just because someone said something which could only ever be funny to those of us living through the experience that is “a performer’s Edinburgh Fringe”.

I’ve already proved that I’m not much of a blogger, but if I get the chance to report a few stories from the Front, I will do. Otherwise, if you’re going to be in Edinburgh in August, do come to the shows – they’re both free to get into (we can discuss a leaving fee later), and details are on my ‘Forthcoming Gigs’ page. And if you do come, be sure to say hello afterwards, won’t you.

Now… back to that that suitcase…

So long and thanks for all the phish

It had been going quite well recently. I’d incorporated TwitterQuest into the stand-up show I’ve been previewing for the Edinburgh Festival, which had generated quite a few new followers. After just seven months (not eight, as I mistakenly told the world just now… read on; I’ll explain), I had peaked at 2,287 Silent Witnesses. I was looking forward to seeing how many more I might accrue during the festival next month.

After a happy spot at a gig last night, compere Lewis Bryan (@lewisbryan) had kindly, and unasked, told the audience they really ought to find me on Twitter and follow me. They’d see why when they found my profile, he said. When I turned on my computer an hour or so ago, I was thrilled to see a couple of them actually had.

@@richardrycroft WHAAAAAAAAATTT??? You only tweeted! The world will surely end today!!!!!!!

I looked at the top of the page and saw the words:

What?! How could this be? Could I have sent a tweet without realising? Was this the onset of dementia? Perhaps I sleep-tweeted?

No, the answer is simpler and more 21st Century than that. My account has been hacked. Someone today has sent this, in my name, to over 2,000 people:

Yes, I’ve deleted the address. I’m not giving them another chance to profit from me.

My apologies, of course, to everyone who received it. I suppose there’s an irony that the spam should have been advertising a diet. One person, a couple of months ago, did try to get me to tweet by sending a series of incredibly rude messages about what a “fat, ugly c***” I am, so maybe he’ll see this as a victory.

But I’m rather sad that it should have ended this way. I’ve been publicly quiet, but privately, I’ve enjoyed exchanging messages with a few of the people who signed up to this nonsense and seemed to enjoy the ridiculousness of it as much as I have. One person has regularly checked in to ask how it’s going, and to encourage me to continue doing nothing! Others, such as the brilliant comedian, James Acaster (@JamesAcaster) would occasionally taunt me with:

Well, the silence has been broken, so TwitterQuest must end. It took me a few minutes to even work out how to do this, but about 20 minutes after the “spam diet” tweet, I finally sent my first actual one:

Dammit. Not only have I been hacked, I’ve had to find out how to send a tweet. Game’s over. Thanks to everyone for joining in. It was fun x

Even by then, my followers had dropped by about 30, and I absolutely agree with their actions. More have left since then, and I suspect I may now be watching the numbers fall with the same fascination which grabbed me while watching them rise.

I’ve received a wonderful series of messages from other people today, which prompted my next tweet, a two-parter because I haven’t mastered this 40 character thing yet; I’m very new to all this:

Thanks for the suggestions of deleting it – didn’t know you could do that – but it wouldn’t be honest. I peaked at 2,287 after 8 months…

… Many have left since the tweet. I’ll decide this week whether to delete the account
or actually use it for tweeting.

So, thank you for all the support; followers, RT-ers, ff-ers (see how I’ve picked up the lingo!) and others. Particularly those who took the trouble to sign up to Twitter just to follow me! It really was ridiculously enjoyable while it lasted. I can’t explain why, and that was part of its joy. If you want to stop following me now, I’ll completely understand. If you’d like to stay, you’d be more than welcome to do so. I can’t imagine I’ll be using Twitter very much anyway, so it’ll still be a semi-silence.

In the next few days, I’ll either set up a new account and tell everyone what that’s called, or I may just stick with this one and see what happens, so long as I don’t get hacked again, of course.

Just for fun, here’s my “Mentions” page from the time of the spam tweet until just before I posted this up:

Seans_GestaltSean Whiteley-Ross
Does this mean the diet doesn’t work?? RT @richardrycroft as it was a hacker, technically I still hadn’t tweeted. If only I hadn’t respnded!
7 minutes agoFavoriteRetweetReply
»

BisleyTAlastair Block
@
@richardrycroft i say keep the account. If you delete, some moron will reopen it and others will follow moron never knowing the difference.
30 minutes agoFavoriteRetweetReply
»

nickrowan27Nick Rowan
Hard not to point finger at Stephen Fry. RT @richardrycroft “Dammit. Not only have I been hacked, had to find out how to tweet. Game’s over”
40 minutes agoFavoriteRetweetReply
»

matmurrayMat Murray
@
@richardrycroft What a calamity. Still, it’s happened now, so it’s now time to use what your momma gave you, and tweet, tweet, tweet!
1 hour agoFavoriteRetweetReply
»

wrd83Alex
@
@richardrycroft it still seems you have more fun while tweeting than during your vow of silence and you have quite an audience.
1 hour agoFavoriteRetweetReply
»

Big_BaffyJim
@
@richardrycroft The Dark Side awaits you sir. You know you want to.
1 hour agoFavoriteRetweetReply
»

thatdamndeborahdebbie wood
@
@richardrycroft Oh don’t delete it. Tweet and be damned! (Along with the rest of us) 😉
1 hour agoFavoriteRetweetReply
»

Big_BaffyJim
@
@richardrycroft I shall frame this solitary tweet as I reminder of the special times we had.
1 hour agoFavoriteRetweetReply
»

thejoyoflexLex Peters
@
@richardrycroft How frustrating! How about starting again with a purpose driven account and use this one to tweet and promote it?
1 hour agoFavoriteRetweetReply
»

Auntie_Jane1Jane D
@
@richardrycroft I can’t believe you’ve had to tweet after all this time. 😦 I’ve loved following you, you’ve never clogged up my timeline.
1 hour agoFavoriteRetweetReply
»

wrd83Alex
@
@richardrycroft you could still delete that tweet and pretend it never happend? 🙂
1 hour agoFavoriteRetweetReply
»

thatdamndeborahdebbie wood
@
@richardrycroft NO! Surely you don’t have to end it after all this time because of one idiot?
1 hour agoFavoriteRetweetReply
»

David_JosephDavid
@
@richardrycroft Or maybe it’s just time to call it a day?  Shame it never went into the millions, though!
2 hours agoFavoriteRetweetReply
»

DougRouxelDougRouxel
@richardrycroft Who was try to amass followers without tweeting has been hacked and sent a tweet by spammers.
2 hours agoFavoriteRetweetReply
»

bobby_carrollBobby Carroll
@richardrycroft has been hacked! I know this as he has tweeted! A scandal!
2 hours agoFavoriteRetweetReply
»

IzzyKennedyIsla Kennedy
Sorry, I RTed that because the guy wasn’t supposed to tweet ever and suddenly there’s one from @richardrycroft
2 hours agoFavoriteRetweetReply
»

David_JosephDavid
@
@richardrycroft Or have you been hacked?  I bet you’ve been only hacked mate…
2 hours agoFavoriteRetweetReply
»